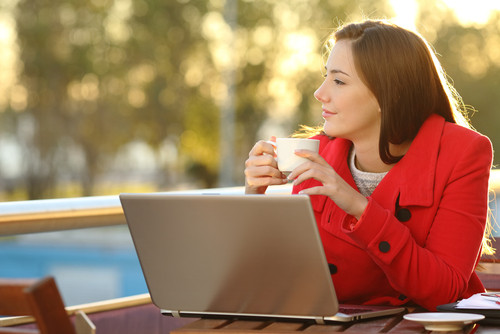 I have since had the opportunity to interview countless individuals from around the world—from the heart of Silicon Valley to the back- woods of Smallville USA, from high-powered executives who manage employees around the clock to stay-at-home moms who rely on electronics to make it through the day, from children born with an iPhone in their hands to individuals in their sunset years who have just learned how to use a mouse—and what I learned was this: the individuals who reported the greatest sense of balance and ultimately well-being could be any of these typologies. They might have vastly different experiences with technological devices, but ultimately the most balanced, satisfied, and happy individuals know how to live with the ubiquity of tech, not just how to escape from it.

Digital distraction abounds in our lives, and the impact of this trend on our focus, productivity, and connectedness is profound. A recent report found that sixty-seven percent of cell owners find themselves checking their phone for messages, alerts, or calls—even when they don’t notice their phone ringing or vibrating. Linda Stone, a software executive who has worked for both Apple and Microsoft, explains that we as a society are suffering from “continuous partial attention.” Our brains are so used to dividing their attention that we can no longer focus on one task at a time.

Why does this matter? According to Cyrus Foroughi, a doctoral student at George Mason University, one minute of distraction is more than enough to wipe your short-term memory. Most interruptions in the real world can last anywhere from ten to fifteen minutes, a troublesome statistic given that an interruption as short as 2.8 seconds (the length of time it takes to read a short text message) can double error rates on simple sequencing tasks, and a 4.4-second interruption (like sending a text) can triple error rates, which is a serious problem when you consider texting and driving habits.

Digital interruptions fall into a sort of Heisenbergian uncertainty trap: How can you know whether an email or text message is worth reading unless you open and read it?—which is an interruption in itself! Typical mobile users check their phones more than 150 times per day, and the average office worker checks their email thirty times every hour—that’s every two minutes!

We need to focus our attention with intention.

Meditation has long been a recommended strategy for overcoming distraction, helping the brain to focus on a single task like breathing so that we can go back to multi-tasking with more clarity and purpose. Meditation has been known to increase concentration and even has spillover effects on your colleagues (even if they don’t know you have been meditating!). Meditation has a cumulative effect—the more that you practice it, the easier it is to recall the principles in the heat of a stressful moment (breathing, grounding, seeing the bigger pictures, reframing…).

I recently discovered an app called MindFi that has transformed my meditation practice (or perhaps I should say, jumpstarted it). Unlike other meditation apps available on the market, MindFi advocates meditating with your eyes open during brief moments of time, whether on a break or over a meal or even during a commute (note: keeping your eyes open is key here). Bjorn Lee, the Singapore-based Founder of MindFi, describes the app as “eye-opening meditation for busy humans.”

This was a powerful mental shift for me. As a recovering perfectionist, it took me a little while to wrap my head around the idea that I didn’t have to sink into a 30-minute deep meditation exercise for it “to count” (as a working mother of three little girls, those moments are as rare if not non-existent). But three minutes? Everyone has got three minutes, right?

Given the number of distractions in our lives, we have to learn to be present right where we are. MindFi is part of an emerging cadre of transformative technologies aimed at helping users to thrive in midst of the digital era. Rather than measuring success by the number of users or the time spent in the app, these technologies measure success by effectiveness (what a novel concept!). Organizations like the Center for Humane Technologies and the Transformative Tech Lab are working towards creating a groundswell of apps and technologies using human-centered design and ethical standards.

But ultimately it takes users like you and me to put these resources to work in our lives to reap the benefits. I encourage you to embrace a growth mindset for trying new strategies for positive change, and I would love to hear about your journey!