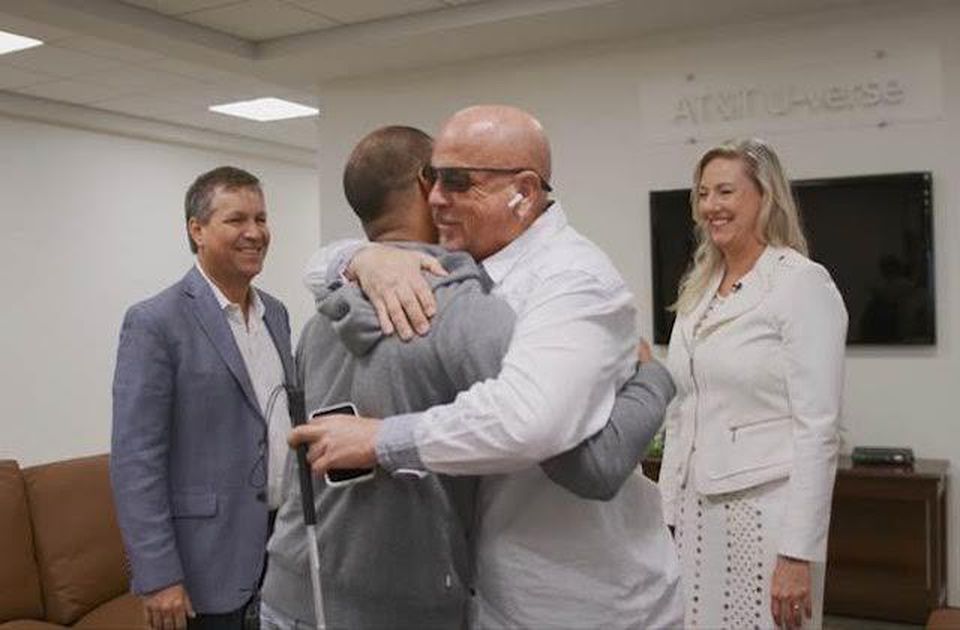 A New Vision For The Future: An IoT Solution To Assist Blind People With Sighted Support

Health & Wellness / Tech that Brings Us Together

Imagine waking up one morning to find yourself blind after a lifetime of seeing. This scenario became the reality of 35-year-old Eric Burton, an active and ambitious individual who was in the throes of climbing the corporate ladder. Burton was born with a rare degenerative eye disease called Retinitis Pigmentosa, which caused his vision to fade slowly until one day it disappeared altogether, “like a lightbulb switching off,” Burton reflects. He

entered a period of darkness, both literally and figuratively, as even the simplest of tasks became daunting to him: leaving the house for a walk, meeting up with friends, ordering food, running errands. Life as he knew it was changed forever.

One day, Burton’s wife Kelly, an AT&T employee, came home bubbling about a phenomenal new partnership between AT&T and a tech firm called Aira that was trying to help blind people “see.” “Seeing” involved using video-enabled sunglasses to connect an Explorer, a blind person, with an Aira Agent, a remote guide who describes surroundings over cellular to help navigate an environment.

At first, Burton didn’t really want to hear about this new service. “Blind people get tired of everyone trying to ‘fix’ them,” he recalls, having now been blind for 20 years. “I’ve tried so many things, only to end up frustrated with my hopes dashed.” However, after a recent tumble over an un-parked city bike caused him to tear his ACL, Burton realized he had to try something different to navigate a world that was significantly more treacherous without his vision.

Burton agreed to try Aira and, after a short training period, he was ready to see just how far he could get with his new augmented reality tool. His goal: to surprise his wife by cooking her dinner, a feat that would require him venturing alone to the grocery store for the first time in two decades.  With the help of an Aira Agent named Jack, Burton called a Lyft to take him to Trader Joe’s. Once inside, Jack helped Burton to navigate the store, select good produce, and even pick out his wife’s favorite wine.

When Kelly arrived home that evening, Burton had not only completed his grocery shopping but also successfully cooked her an entire meal. As the realization set in that he had accomplished all of this, she ran and hugged him. The experience became a turning point in Burton’s life, opening new possibilities for him to run errands, meet his wife downtown for lunch, even to visit the Sculpture Garden at the Dallas Museum of Art to share the day with his son who has his MFA in art and poetry. Burton explains that his greatest excitement about Aira isn’t the things that he has been able to accomplish, but i nstead the things that he looks forward to doing, like reading books to his young grandchildren who don’t understand thathe can’t see. His motto for the year is now, “What’s next?”

Aira founder and CEO Suman Kanuganti couldn’t be prouder when he hears stories like Burton’s. Kanuganti originally conceived of Aira after having a conversation with a blind friend about how Google Glass could be paired with a service akin to “OnStar” for the blind.